While staying in STAY HYBRID HOSTEL

Introducing this special interview by a quote from Quentin Tarantino’s all time classic seems very proper, because the Stay Hybrid Hostel is exactly one of those places where high respect for pop-cultural nerdism meets affordable comfort and love for the eco-friendly architecture. All of these flavours could be also traced within the personality of Zeid Horani, who is one of the owners and founders of this uniquely chilling place.

BALKAN HOT SPOT: For a start, let’s go little bit into the history of this particular building in which STAY HYBRID HOSTEL is located. Do you know what the original purpose of this house was in the past?

ZEID: Yes. This building was built in 1971. Actually the original permit to build it mentioned a hotel, so it was built under the standards of a hotel. So it was supposed to be a special building that was not build as a residence, but it never was a hotel, because government did not let this process to come to completion. Thus in 1969 the ground floor was built and later on the floors were added in 1971. And it was always an office building.

In 2012, the government left due to austerity measures. So around 2016, me and couple of friends came around and we actually explored it. It was very suitable for us, because it was very open and you could play with it in any way you wanted and also it covered the standards to do such an investment.

So this building is not very old and it was actually a very ugly building: the air-conditioning went outside the windows, the water pipes were broken, the electricity was very poor or it did not worked properly, the interiors also contained a lot of holes and dead animals, so it was basically a ghost building. We had to fully renovate it, because the whole building was worn out and thus it needed a lot of work. But we did, because it was also our job to do it and also to get a certificate for it that would secure its insurance for another 50 years. 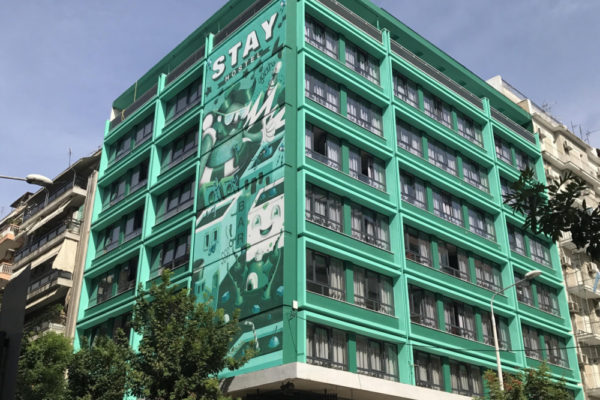 BALKAN HOT SPOT: Have you ever done something this big before? I mean like full scale renovation of this kind of building?

ZEID: Of course, we renovate the antiquities, but this was easier. It is like surgery and pathology somehow. 🙂

On the other hand, I should say that it was also a really demanding project, because it is not only about being the contractor and doing the project. It is also your project and you have to keep it within the limits of the budget. So you have to take care of it. It was very challenging.

And also the permits from the city and government issues were not simple at all. The government officers were not very familiar with this kind of project. So at first, they did not know and they were like : “should we give the permit? We do not know. We have to look at it first. etc.”  And this took us a lot of time. We had like six months delay only because of this. So the building was ready and we still could not use it for the hostel, because of all this hesitation from the side of government’s officers. So it took us some time. We had some ups and downs of course, but now we are up and going, since last August. 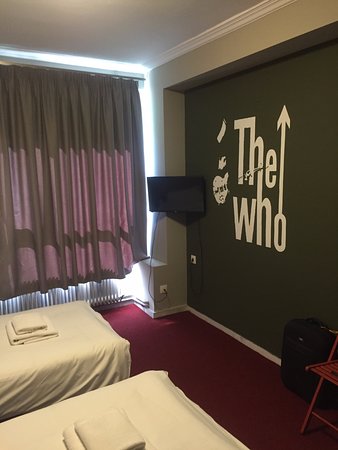 BALKAN HOT SPOT:  What was the primary vision? Because your hostel has very unique name, STAY HYBRID HOSTEL, so what exactly should we imagine behind that?

ZEID: So hybrid hostels are actually started out from the United States few years ago, because some people like the hostel concept, because of interacting with people, mingling and everything, but at the end of the day they also wanted some privacy. Even some of the proper hostels also have both the dorms and private rooms, so the people could have some privacy as well. Not young people like you, but bit older, which are also looking for a place where to do their work, so that is why the demand of the people created this idea.

So in 2016, this idea was also brought to Europe and now we are not only talking only about the hybrid hostels, but also about the boutique hostels, where you pay a lot of money to have a that kind of privacy. But we really wanted to give the experience to everyone who is staying here to have this comfort in whatever area they would want. So for this reason, we have many kinds of rooms and this is what hybrid basically means: privacy and community for a good price.

BALKAN HOT SPOT: Yes, I have also noticed that up here in the top floor you have a presidential apartment with much more privacy than in the regular dorm rooms downstairs.

ZEID: Not exactly this up here is actually a penthouse, which is actually 160 square meters large apartment. It also has three bedrooms, the bar and the terrace. It might seem a bit expensive for a first sight, but if you think about it in a larger scale, let’s say that you and your six friends are looking for a comfortable place to stay in Thessaloniki. So if you share the cost, the penthouse will be like 17 euros for each of you per day in the end. Also many music bands have been accommodated here in this apartment since last august. And many of the band members also puked there as well.  🙂 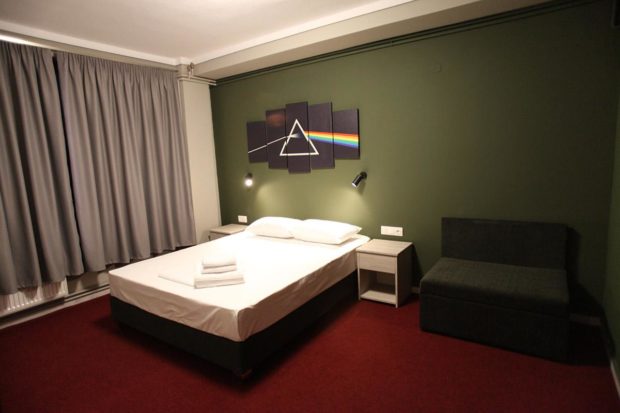 BALKAN HOT SPOT: What was the vision behind this whole place?

ZEID: Well, every building has a character of its own. So, in a first place all three of us, designers of this place, we like music a lot and this hostel also contains rooms of many types and for this reason the main concept since the beginning was to dedicate each type of room to a different musical genre.

We have some rooms that are dedicated to punk rock. The penthouse is for example made as a tribute to jazz music. Then we have a room dedicated to funk, which we call a funky chamber. We also have the rock star suit, which has Pink Floyd and The Beatles in it. And then from the private rooms we go down to the dormitory and there we have a Seattle section, Hip-Hop section, Gothic Rock, The Legends, Prince, Jamiroquai, Michael Jackson, Reggae, etc. … so it very much depends on the type of the rooms and in each of them you see a different artist that represents a certain kind of musical genre.

On the other hand, we also did not have enough space in the hostel to credit all of our musical influences and thus we have to choose very carefully. This process took us like a whole week, during which we were intensely deciding which artists are going to be placed in which rooms.

And there is another dimension connected to energy consumption and ecology. So for this reason we have solar panels, LED light bulbs or thermal (heat) pump which heats the water naturally and it does not cost any energy at all. The whole building is also fully thermally isolated and thus it does not need a lot of heating (in the winter) and a lot of cooling (in the summer).

All of these decisions were on a one hand a pretty high investment, but at the same time they made this hostel a very comfortable place to stay and thus I am very proud of it. 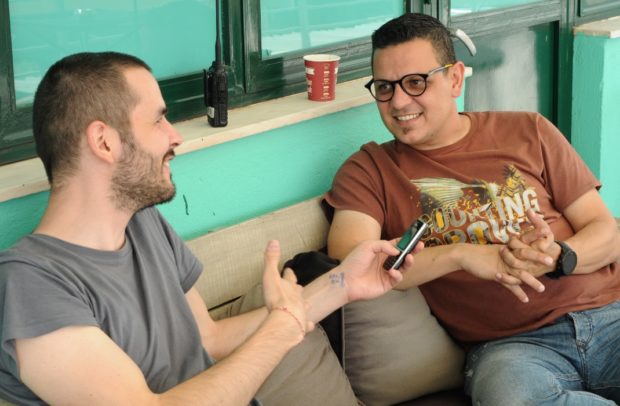 ZEID: Well, of course I feel over here like at home. I actually live here at the moment, because somebody has to be here and take care of the functioning of this place. Every day there are some challenges that need to be solved and thus someone has to be here to do it.

BALKAN HOT SPOT: Thank you very much for the interview.

I am 30 years old traveller and art-lover from Slovakia, staying in Greece throughout the whole year of 2018. My main interests are nature (of reality), board gaming, music and visual arts. Thus I love to report mainly about the local cultural events and writing interviews. Since the beginning of May 2018, I was also appointed as one of the editors-in-chief for our lovely blog bubble.