Last Saturday, March 31, eight graduate students from different departments of theatre organized a unique group presentation of their diploma works inside of the Alatza Imaret, in Thessaloniki. Even though each of these students graduated in a slightly different field, all of their works were more or less connected to the theatre.

Apart from these exhibitions, Alatza Imaret also hosted in its side rooms an art installation – “The suffering body” – by Christina Kouvouklioti, a musical performance – “Cenci in progress” – by Katerina Vafeiadi, and a performance – “6 months over, 6 months down” – by Hara Argyroudi & Anastasia Papaioannou. The whole event was presented with the support of the Municipal Art Gallery of Thessaloniki.

Luckily enough, we also had a chance to make a short interview with three of the exhibiting artists. The first of them was Iro Papakosta, the author of “Four Costumes from Aesop’s Myths.”

Balkan Hotspot: Why have you chosen specifically these characters from Aesop’s fables?

Iro Papakosta: I wanted to choose different characters from Aesop’s fables, and I was looking for different species of animals so I could create different textures and transform them into something. Thus, I have two mammals, one amphibian and one bird.

Balkan Hotspot: Regarding characters, did you choose different dressing styles from different eras for each of these characters?

Iro Papakosta: The era is the same for all of these characters. Let’s say they come from a different social status: the fox and the ox are a bit more elegant members of high society; the frog lives next to a lake, so it is poor, but it wants to have some social class at the end; and the raven is the guy who is stealing things, and that’s why he is wearing clothes that will help him hiding stolen items or easily disappearing into the crowd.

Balkan Hotspot: Which of these stories was the most difficult for you to capture?

Iro Papakosta: I think that it would be the frog because of the shape. Because all of them have different mentalities and different forms, but for the frog… it was something very different, something big, lots of curves for the eyes and the cheeks, so it was a bit different. While I have been working on it, I had to think in a bit of a different way.

Balkan Hotspot: To which of these qualities do you gravitate the most? Because each one of these characters represents different flaws that we can also find in us, humans… so which one, out of these four, are you struggling with the most?

Iro Papakosta: Let me think about it a bit, it’s a good question… It would be the fox. I think that sometimes, when I can’t complete something, I just say: “It is OK, it’s not important for me anymore!”

Balkan Hotspot: How much time it took you to develop these wonderful masks and what was the technique that you used?

Iro Papakosta: For the main structure of the masks I used the strings of metal and then papier-mâché technique, and later, on top of it, I printed gravures. You can see through all of them, and they are all wearable. Then, in the end, each of the characters is painted for a texture.

Balkan Hotspot: Was there something in this project that significantly developed your style? Or was there some sort of technique that you had never used before with which this project helped you to explore in greater detail?

Balkan Hotspot: What was the initial impulse? Which reason let you to try the mask production?

Iro Papakosta: The first sparkle of inspiration was this old book that I found in the library, which was touching on this subject. Animals for the stage, for theatres… So I wanted to do something like this. Then I saw this on a construction part, and I decided that the masks and the tales should be somehow creative. The initial thought was to make them all accurately and realistically. I think that in this part the whole thing came out to be much more interesting.

Balkan Hotspot: What about the other projects? Are they interconnected somehow?

Iro Papakosta: No, we just decided to present all of them together as a final project for our master’s degree.

The second one of them was Malamati Efthymiadou, the author of “Three Faces of Victorian Literature.”

Balkan Hotspot: Can you tell us something more about the idea that led you to prepare the clothes for these characters?

Malamati Efthymiadou: These characters are all from the Victorian Era literature: Dracula, Dr. Jekyll/Mr.Hyde and Dorian Grey. I choose these three characters because I think that they share a common thing which is the double identity. And their appearance is different from their substance, from their inside.

Dorian Grey is on the outside something completely different in contrast with what his portrait reveals. I wanted to show that he’s very elegant, but at the same time, he’s very picky about his appearances and very concerned about fashion because having a good time is his main concern. But I also tried to show the duality of his nature.

Balkan Hotspot: Which was the most challenging part of making those clothes for Dorian Grey?

Malamati Efthymiadou: The pattern of his dress was pretty complicated, and for the first time I was dealing with man’s work, so it was a bit of a challenge for me too.


Balkan Hotspot: Can you tell us more also about the dress of Dr. Jekyll?

Malamatis Efthymiadou: Yes. He also has many layers of clothes through which he’s trying to conceal all of his dark sides that he cannot express because society would not allow him, so he invents this dual personality. Everything is his attempt to hide or conceal violence that is hiding in all of us.


Balkan Hotspot: Which was the most difficult aspect of the creation of Dr. Jekyll’s dress?

Malamati Efthymiadou: It was also very difficult for me to work with the leather, which is pretty hard material to work with. So, instead of machine sewing, I had to sew it by hand.


The third one of them was Elina Eftaxia, the author of “Alf leyla wa leyla – Three Faces – One Night.”

Balkan Hotspot: What do you study?

Balkan Hotspot: Could you give us some more information about the story?

Balkan Hotspot: Why have you chosen this story & characters from “Alf leyla wa leyla”?

Elina Eftaxia: I chose this story because it has lots of interesting characters in a quite short tale. Other tales are either very long or don’t have such a huge variety of characters.

The story combines supernatural creatures, like jinns (better known as ginnies/genies but there are some differences); a very beautiful woman which appears miraculously through a wall and talks to fish that are being cooked in a pan; a king that is cursed and has to live with half of his body being black marble; also a sultan & wazir, as well as poor people like a fisherman or the sultan’s cook. I wanted to try to create the costumes for the supernatural characters. My point of view was to design them in a style of Western Orientalism.

The West saw the Orient as something exotic, luxurious and mysterious. I wanted to show the wealth and the expensive looking costumes using very cheap materials and decorations. For example, I used pasta (rigatoni and fusilli) for the accessorising of the jinni.

Balkan Hotspot: Which character was the most difficult for you to design and why?

Elina Eftaxia: The jinni was a little bit difficult because I had to read a lot of theory about these creatures. They are mentioned in the Quran and are also pictured in manuscripts like the “Kitab al buhan”. In most of the paintings, they have horns or look like goats. They also are shapeshifters and can look like whatever they want. So, I decided to keep the horns, but I combined both types I found through my research. My jinni has four horns.

The jinns and the humans are considered to be the only intelligent creatures on Earth. The Muslims believe in their existence, but they are invisible to the humans unless they want to show themselves. They also decide if they want to be nice or evil.

I wanted him to be evil and very big, like the jinn that is described in the tale, so I made a construction with wire that is worn by the actor. The head of the jinni is a construction that is worn like a hat. So, the actor is invisible inside the costume, and the character is bigger than a human in size. It was difficult to imagine how this creature looks. I ended up making him look almost human but in a creepy way. The inspiration was to make him look a little bit soldier-like because in my mind he is a ‘soldier of God’.

It was difficult to imagine how this creature looks. I ended up making him look almost human but in a creepy way. The inspiration was to make him look a little bit soldier like, because in my mind he is a ‘soldier of God’.

Balkan Hotspot: Which character from the story do you consider to be the closest to you/your personality?

Elina Eftaxia: The three characters are not very deep in this story. The jinni is evil and, in the end, he learns his lesson and becomes nice. The king is unable to move from his place. I mostly relate to the woman. She appears like a miracle, she doesn’t care about the persons around her, she wears a nice dress and is the most mysterious appearance in the story because no one understands why she has this weird relationship with the fish. I relate to her the most because she seems to be a dynamic woman.

Balkan Hotspot: It was the presentation of your final project in Master’s degree. So, what are you planning to do in the future?

Elina Eftaxia: I am very lucky because I get to work occasionally in the National Theatre of Northern Greece. I got a new job offer and I am starting right after completing the Masters. I am going to be a scenography and costume design assistant. It’s for their summer production “Orestes” which is going to premiere in July, in Thessaloniki, and at the festival of Epidaurus, in August. I want to continue to work in the theatre and to make a living just from that. 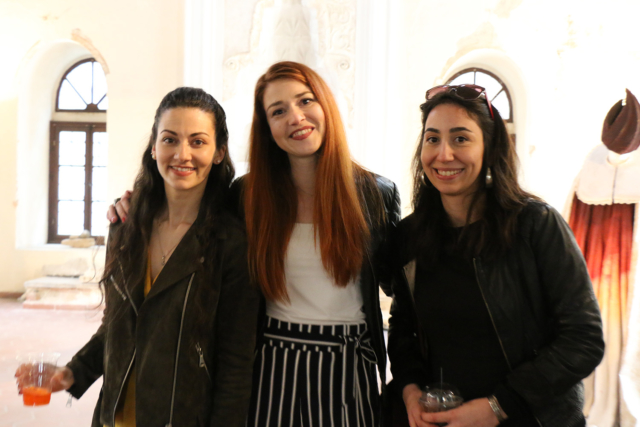 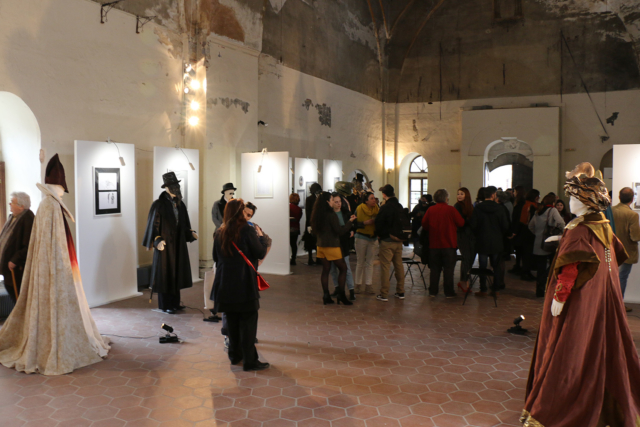 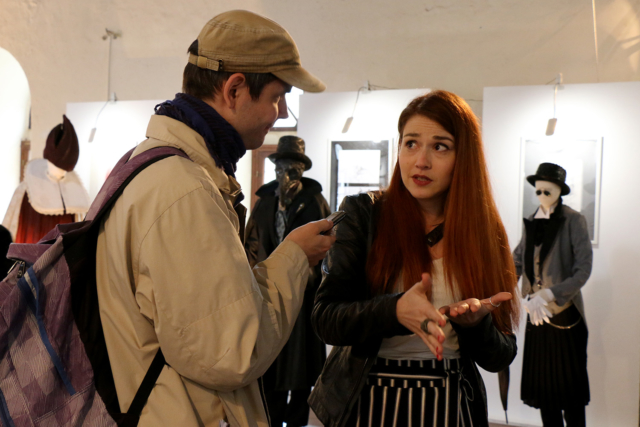 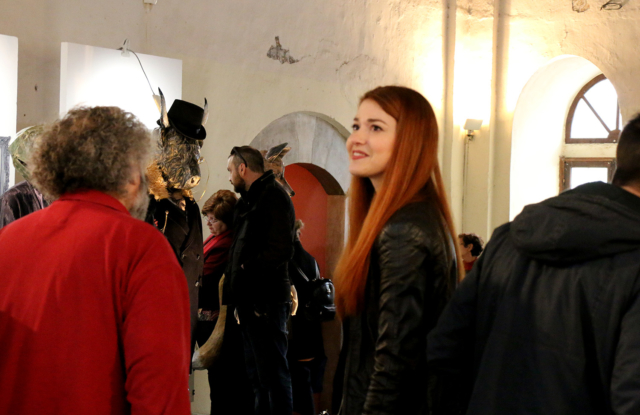 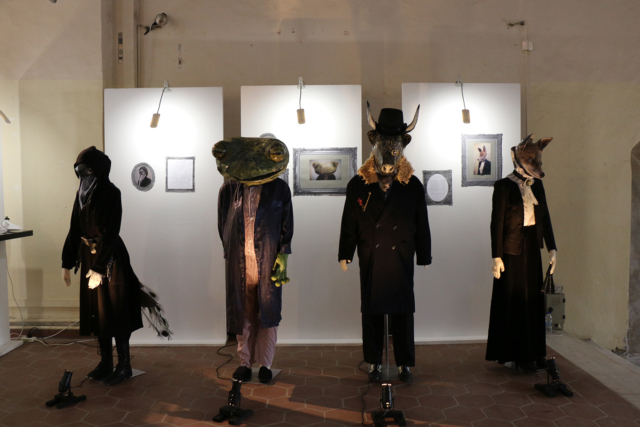 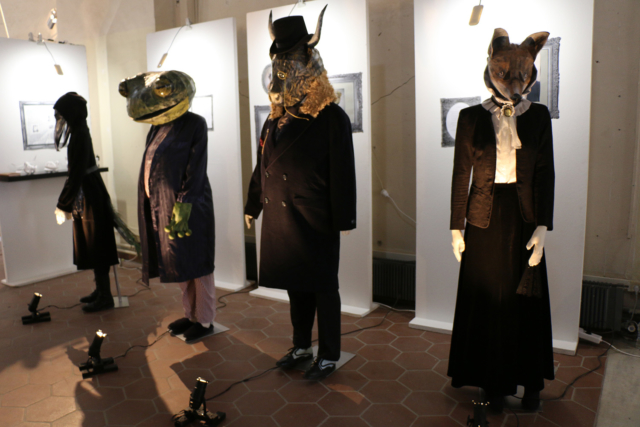 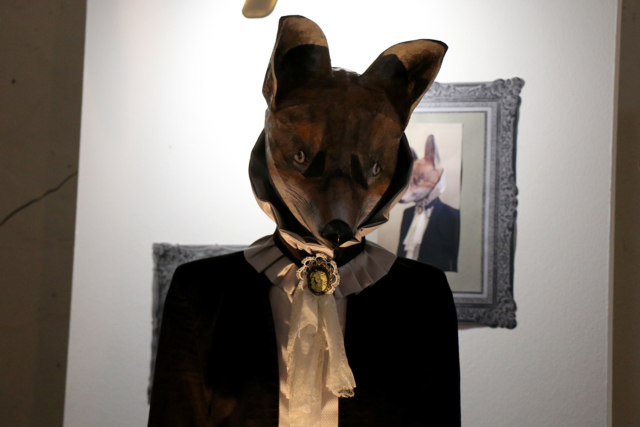 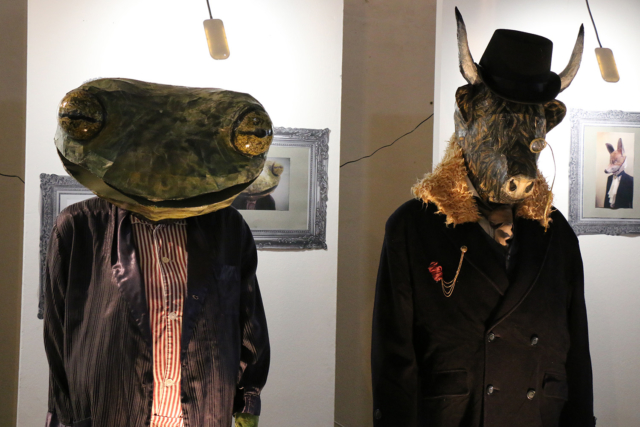 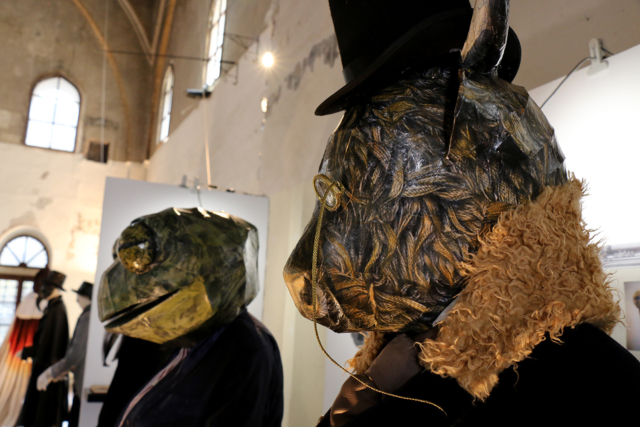 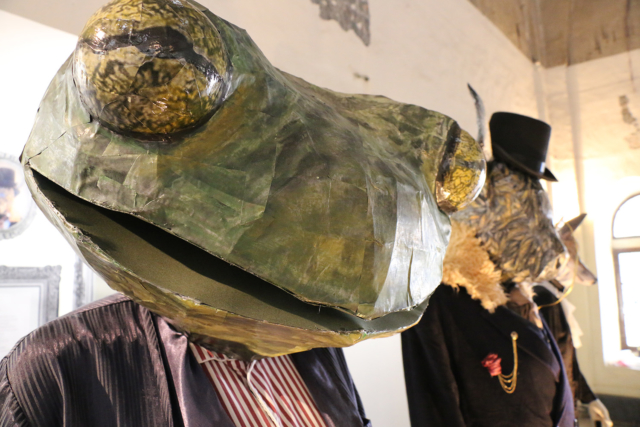 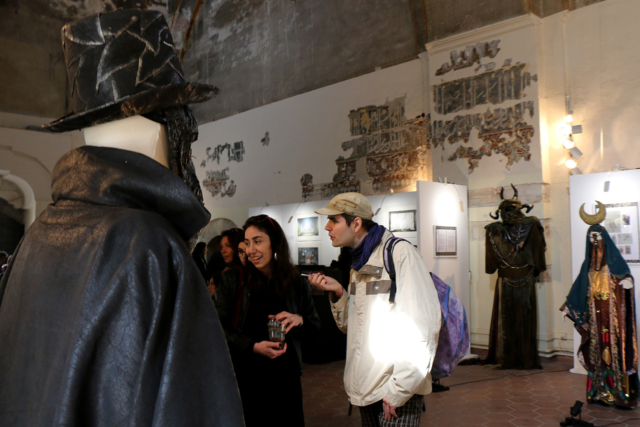 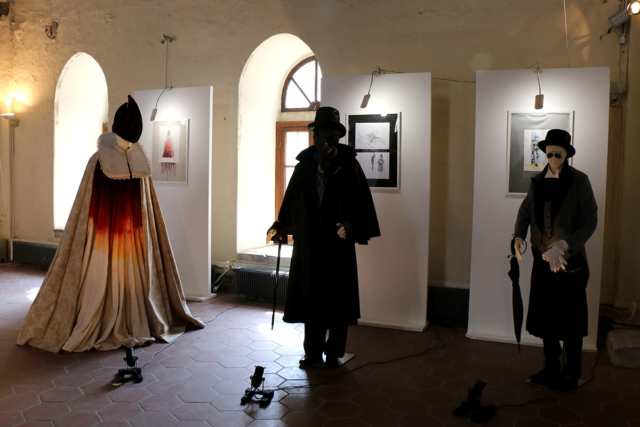 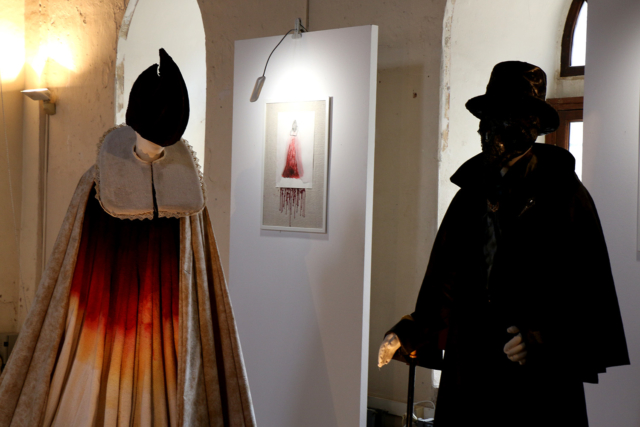 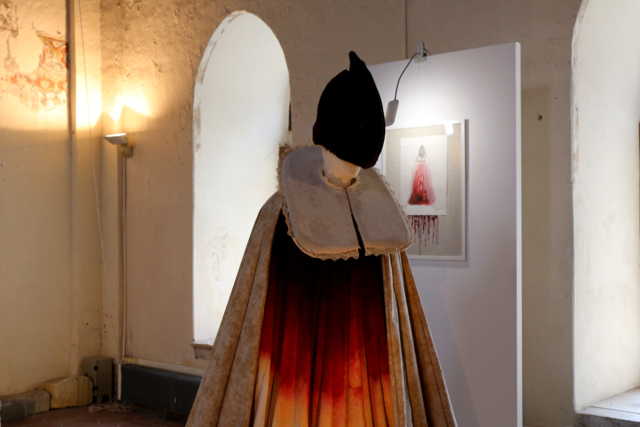 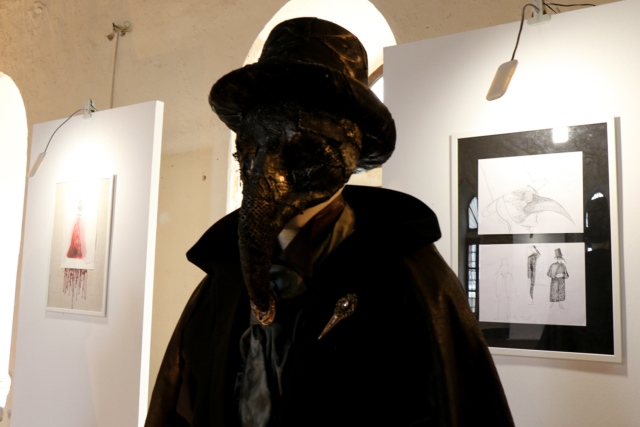 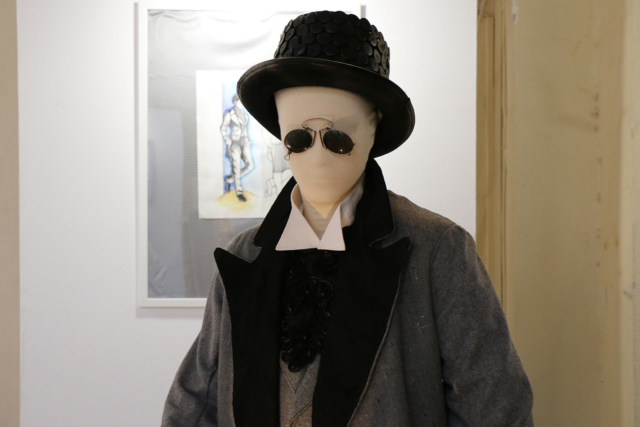 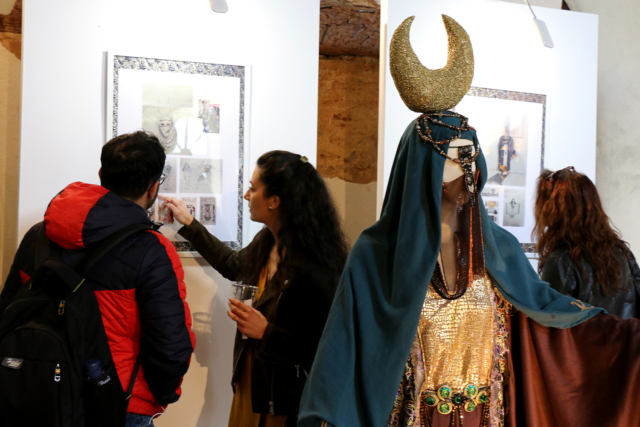 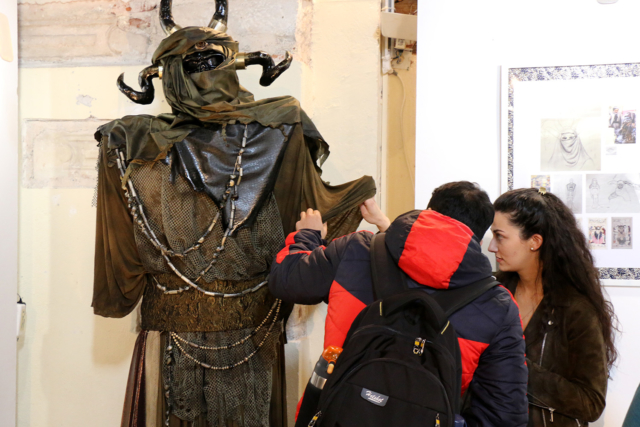 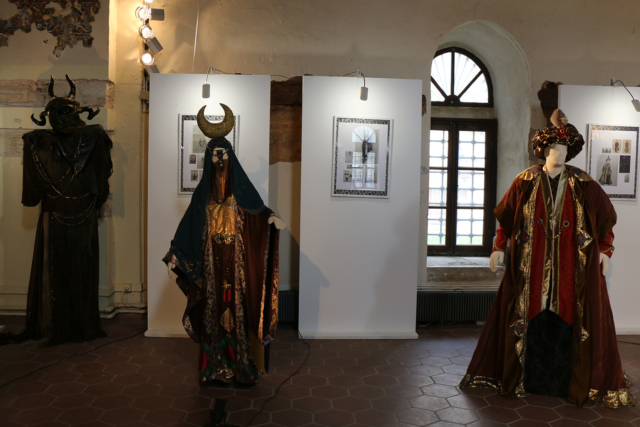 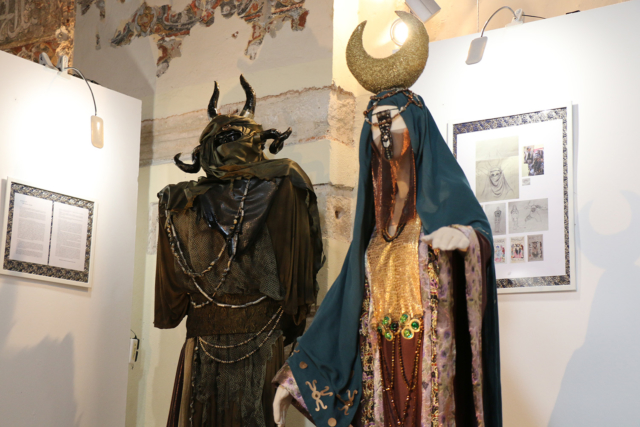 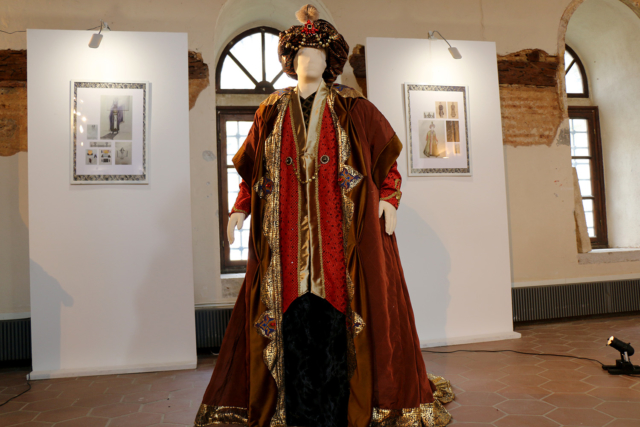 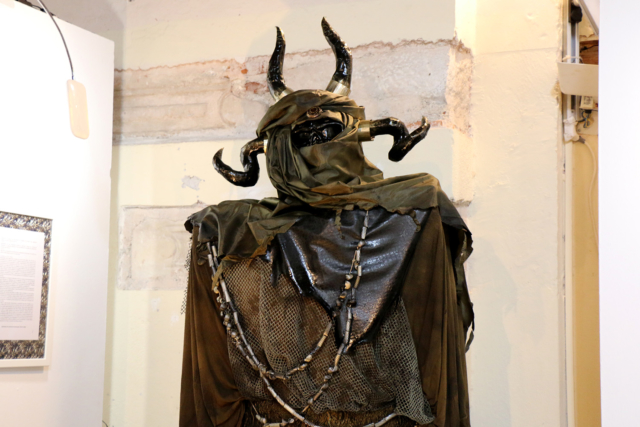 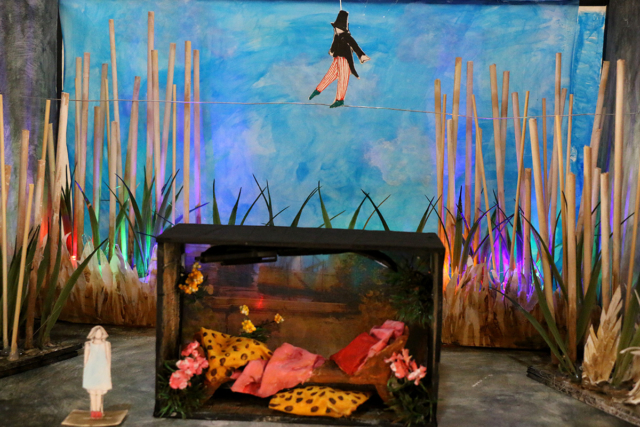 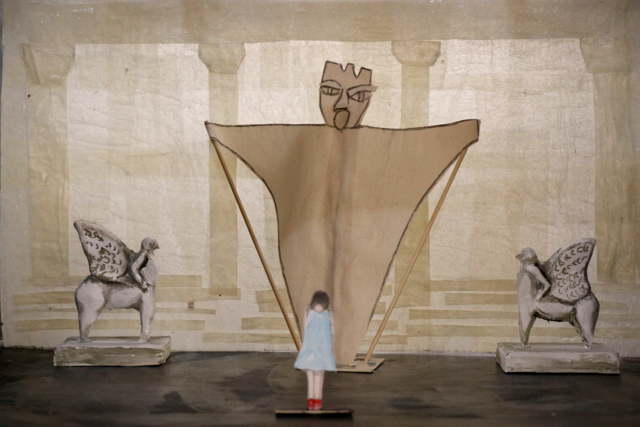 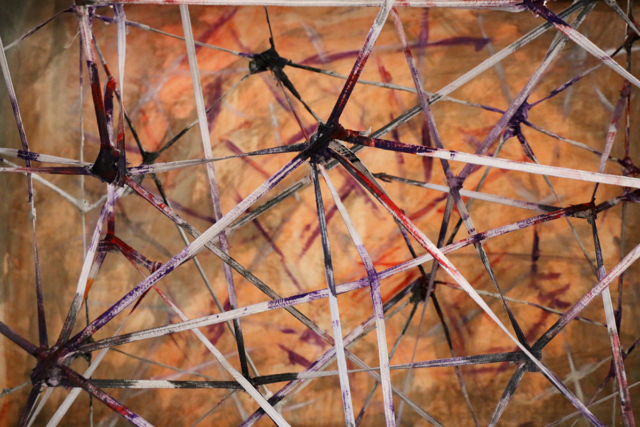