From February 6th till 18th, the Photography Center of Thessaloniki held the “On the Bell Roads” exhibition. This exhibition showcases the combined effort and initiative of both locals and photographers to preserve the rich old tradition of where both shepherd and peasant communities share common things, such as fear of a poor harvest or the feeling of hope for a rich harvest. Through the display of performances with disguises, masks, animals skins and their iconic object – the bells. These perform a ritual to the mysterious forces of nature and to repeal the evil demons that hunt their harvest. In this ritual, the bell possesses an important role in the protection of man’s communities for its magic and supernatural qualities, attributed by mankind, a long time ago.

Once a year, a common procession is held in the city of Thessaloniki creating waves of colors, masks, disguises, musicals and, of course, the absolute enchanting sound of thousands of bells vibrating throughout the city. It is organized by the  action group “The Roads of Koudouni” since 2013 and, since then, it’s been supported by the Ministry of Culture of Greece, the Municipality of Thessaloniki and by other important institutions of the city 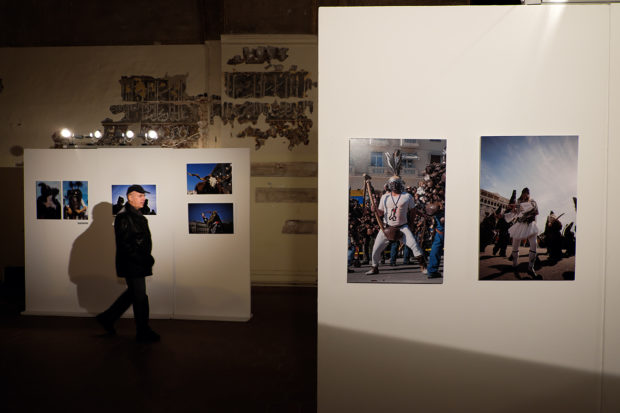 Photo Exhibition of “On the Bell Roads”

Regardless of its support and international fame, this year’s Bell Roads Festival did not manage to obtain enough foundings to organize their annual parade through the streets of Thessaloniki. Anyway, regardless of the absent of music, dances and bell rings, their supporter did not go unheard, making it possible to organize this exhibition to expose the riches of their traditions.