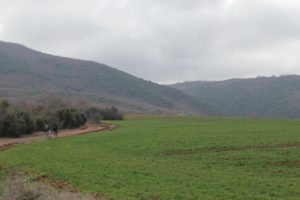 It is Monday morning and the blue sea appears again among the white clouds from the heights of Agios Pavlos. For the last two days Thessaloniki has been under a dense fog, but suddenly the sun came back to shine.

However this is not an usual beginning of the week, this is the first day of the 7th week before the Orthodox Easter Sunday, that means it is the Clean Monday. In this day the tradition wants people to go out having picnics in the country-side and flying kites in the sky. The time between February and March is usually the end of the winter in Greece, when days become longer, sun warmer and fields greener.

It is something similar to the Italian “Pasquetta”, the monday after Eastern when people enjoy an open air day with barbecue and friends but, in fact, the southern we go, the earlier spring comes.

A day like this cannot be spent in town, but actually we don’t know where to spend it at all. In this case there is just one thing left: go to the station and get on the first bus passing by.  Athens is too far and the beach too untimely while Zagliveri, a little village one hour east of Thessaloniki, looks just perfect. Behind our seats there is a group of young, trekking shoes at their feet and picnic hampers in their hands: “cool, fate put us on the right way!”, and one hour later, here we are, sharing the same table, forks, food, stories, laughs and fellowship of this beautiful people just strangers until some moments before.

Food. A lot of food. A lot of crazy delicious food. There is the lagana, an unleavened flatbread baked just for this day, and it tastes insomuch good that you would never stop to bite it, until the moment you figure out that the six or seven different sauces to spread on, are even better. The one with capers is the most listed and it disappears in two minutes. After that it’s time for the fish eggs dishes, the color of pink French macarons and the taste of sweet caviar. We eat and eat, while there is always a bag full of food going out from under the table, inside a back-pack or forgotten in some nook of the the wooden gazebo where we have settled in.The air that becomes cold reminds us that is still February and that it will be dark soon. It’s time to run back toward the street, the bus won’t wait for us. And walking through the green cornfields that make the panorama looks like a huge English landscape garden we say see you soon hopefully to our new Greek gang.