In 1999, UNESCO declared the 21st of February as the International Mother Language Day in tribute to the students and political activists that formed the political movement, known as the Language Movement. The movement was developed in East Bengal, known today as Bangladesh, advocating the recognition of the Bengali language as an official language of the then-dominion of Pakistan, in order to maintain and allow the usage of their languages and writing. In 1948, a year after the forming of the Dominion of Pakistan after the partition of India in 1947, the  Government ordered Urdu as the sole official national languages, sparking extensive protest, tensions, and mass discontent among the Bengali speakers towards the Pakistani government. in response to this, the government outlawed public meeting and railing in the East Bengal area. 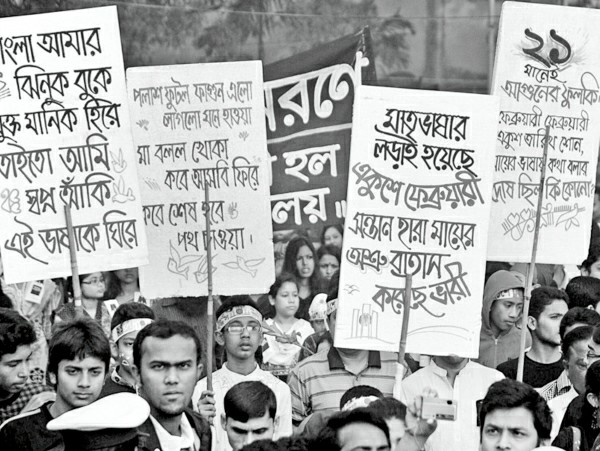 Even though forbidden, students from the University of Dhaka, accompanied by other political activists, defied the Dominion´s law and organized a protest on the 21st of February 1952. It ended with the murder of student demonstrators by police enforcement, which provoked a widespread civil unrest in the area. After years of clashes and conflict, the central government relented and granted official status to the Bengali language in 1956. The movement, which catalyzed the proclaimed the Bengali’s national identity in East Bengal and, later, East Pakistan became a forerunner in the Bengali nationalist movement which, subsequently, brought the Bangladesh Liberation War. Today, 21th February is celebrated as a landmarking date and a national holiday in Bangladesh where people reunited at Shaheed Minar monument, constructed in memory of the movement and its many victims.