The International Holocaust Remembrance Day and the Jewish Community of Thessaloniki

The 27th of January is not like any other day. It is a day to remember all of those who suffered, in any way or form, in the Holocaust which occurred during the second quarter of the 20th century. It is globally known as the International Holocaust Remembrance Day, and was founded by the United Nations General Assembly Resolution, in November 2005, a few months after the commemorations of the 60th anniversary of the liberation of Auschwitz-Birkenau, the biggest and most notorious concentration camp, where an estimate of 1.1 million people were killed. Even though there had been other annual celebrations of this date and this cause, prior to 2005 there was no international official commemoration. Thus, this day is of an extreme importance at a global level, not only to recall all of those who perished or suffered due to the extermination led by the Nazis, but also to remind the world of the horrors of these events and lessen the possibility of their reoccurring. With over 6 million Jewish deaths during the Holocaust, the European Jewish community was the most affected by these events, two thirds of them having been exterminated by the Nazi’s Final Solution.

It is well known that Thessaloniki was home to one of the biggest Jewish communities in the world until the Holocaust. For centuries, this was the only big city that remained with a majority of Jews due to the combination of the Jewish diaspora in the few centuries prior to the birth of Christ, and the Jewish expulsion from Spain in the 15th century – there is a reason for this city being called «the mother of Israel». The welcoming of the Jewish community, during the 15th century, was a calculated move by the Ottoman Empire: with a majority of Jews in Thessaloniki, the domination of the Greek people would become less powerful. 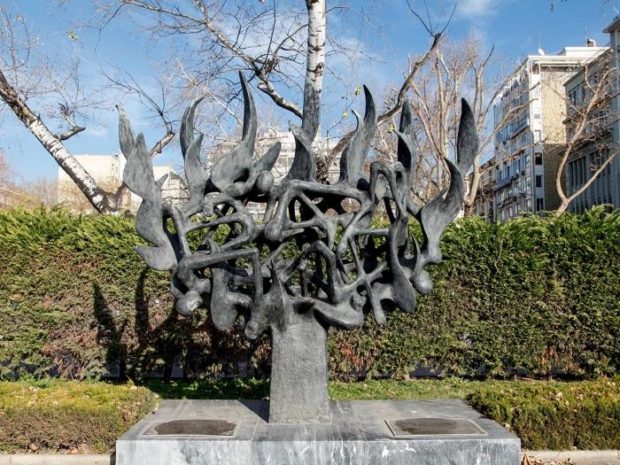 With ups and downs throughout the centuries, the Jewish community in Thessaloniki survived as one of the biggest in the World until the middle of the II World War (1939-1945). The Greeko-Italian War, in 1940, was followed by the German occupation of Greece. This resulted in a gradual growth of an anti-Semitic culture, from the boycotting of the Jewish Press, and subsequently, the prohibition of Jewish workers, to the wider humiliation of Jews in all kinds of ways, with hunger and poverty being imposed on them, culminating in the shipping of an estimation of 54,000 Jews to concentration camps. It is known that over 90% of the Thessaloniki Jewish Community was killed during the Holocaust.

Despite all the well-known terror and horror lived during those dark times, not everyone has the same idea on it. Last week, during the protests and rallies, in Thessaloniki, against the usage of the name «Macedonia» by the Former Yugoslav Republic of Macedonia, a group of supporters of the neo-Nazi group Golden Down, vandalized the Holocaust Memorial statue with a graffiti of the Party’s logo. This act has been severely criticized by the Salonica Municipal Council, the Government and the Thessaloniki community.

As for the International Holocaust Remembrance Day in Greece or, more specifically, in Thessaloniki, there will be a concert, on the 28th of January (Sunday), in honour of the «Greek Jewish martyrs and heroes of the Holocaust». The Thessaloniki State Symphony Orchestra will play at the Thessaloniki Concert Hall, conducted by Zoe Tsokanou, with George – Emannuel Lazaridis at the piano.