Crisis becomes green: the app to borrow things from neighbors lands in Greece

Summer is coming quickly in Thessaloniki and suddenly it’s the time to inaugurate our beautiful balcony with a view over the sea just in front of the Olympus mountain. Three or fuor birthdays give us the opportunity to organize a party for at least 25 people: the amazing sunsets of May, good music, grilled souvlaki and red wine, everything seems just perfect. But the problem is that we don’t have a barbecue, we don’t have lights and we don’t have any birthday decoration. Furthermore we don’t have neither money to waste, nor the intention to buy something that we will use once or two times. 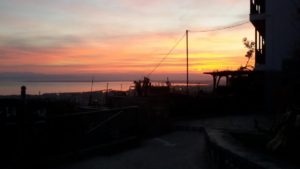 I don’t want to renounce to such a nice event so I start thinking that there should exist a way to enjoy life in the middle of a crisis and being at the same time eco-friendly. I start thinking that when I was a child living in a little village I always used to go to my neighbors to borrow something I needed and so they did with my family. Nobody would have thought to buy a barbecue if someone he knew had one to give. And it was nice. I mean, it was an excuse to set another place at the table, to give back a favor, to be aware that there was a bigger family behind your house ready to help and be helped. It was what we now call Sharing Economy and it’s what the world has been based on for centuries before the culture of consumerism obliged us to waste as much as possible.

I try to turn my ideas into google researches and what I find out is an app developed in the Netherlands called Peerby that allows to borrow things from people in the neighborhood and it’s totally for free. The principle looks like when you want to travel with Couchsurfing: you post a request describing when and what you need and if someone is able to meet it he will reply. The app looks for that among the closer neighbors so that the borrowing will be fast and easy, often already 30 minutes after the post. It’s possible to ask for all sorts of things from barbecues, to tents, suitcases or board games. 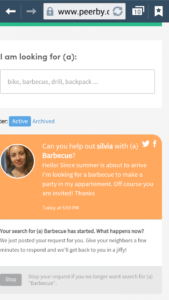 I immediately download the app to try it and see how it works. The performance is very good and easy and I love the idea of its positive environmental, social and economic impact. Actually initiatives like this one could really drive us toward a more sustainable society, where people can abandon the idea of possession to embrace the concept that objects are not the  purpose but just one of the mediums to give our lives a sense. What is really important are people and the time spent to do what we like most, respecting the planet who is hosting us.

It’s logical that the first objective to make the app work is that the largest number of people use it. I sadly discover that in Thessaloniki there are just 4 users, pioneers of Peerby, so maybe I won’t find my barbecue, at least not now. But summer is going to be long in Greece and  I’m very hopeful for the balcony closing party, next September. So people let’s subscribe this beautiful initiative and see what it will happen in some months!