Action Art and the Art of Storytelling

Action Art is a non-profit company founded in 2009 by Rodanthi Dimitressi in Thessaloniki. The aim of the company is the promotion of the “Intangible Cultural Heritage” which, according to Unesco, is related to traditions or living expressions inherited from our ancestors and passed on to our descendants, such as oral traditions, performing arts, social practices, rituals, festive events, knowledge and practices concerning nature and the universe or the knowledge and skills to produce traditional crafts.

This is exactly what the members of Action art want to do encouraging young people to participate in the artistic process and in cultural creation through the promotion of cultural, educational and multicultural programs that involve people and other countries in the development of communication and solidarity.

They provide seminars about plastic, visual and applied arts; programs of artistic nature; educational, cultural and intercultural projects. In the past, there were also training about bookbinding that is how to create the skeleton of the books both for children and adults, but mostly for children. Sometimes volunteers organize also art workshops in libraries according to the style of several painters or they show them how to create handmade works. 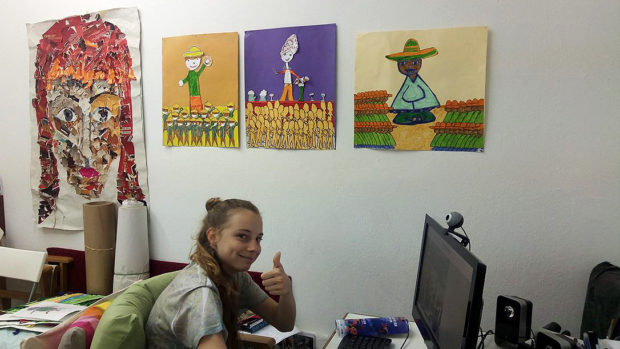 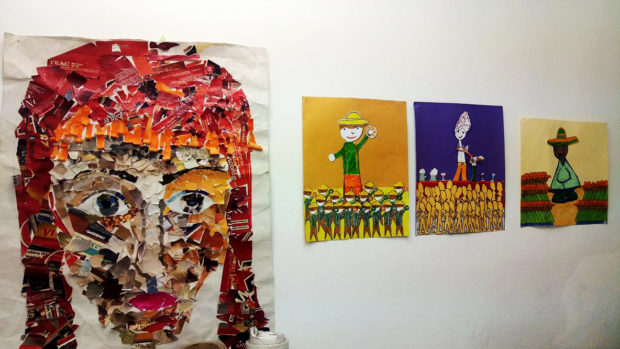 But the activity that characterizes and make known Action Art most than the others is the project of storytelling. In the last 4 years, the company focuses its attention on story-telling seminars with members meeting every week in order to form people about voice, body movement, imagination, narrative education, etc. Through this kind of work, they want to promote the communication between members of a group and also encourage inner explorations. In fact, last weekend there was a big seminary about how to channel and handle the feelings about storytelling training and storytelling performance, while last year the topic was the communication between cultures and languages.

Trained people give performances for free in cultural places, organizations, schools, libraries or they can go to school in the morning schedules for full performance. 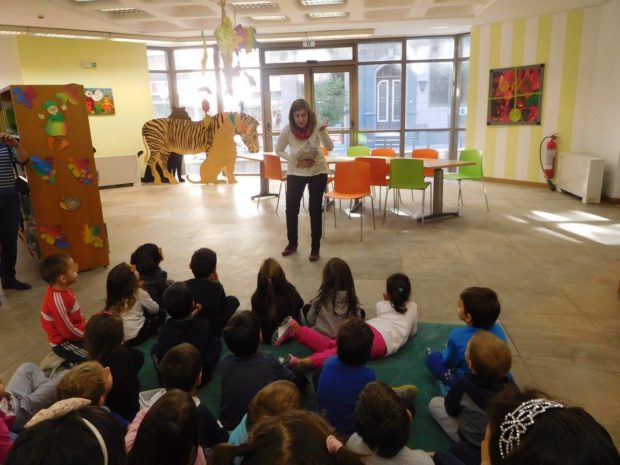 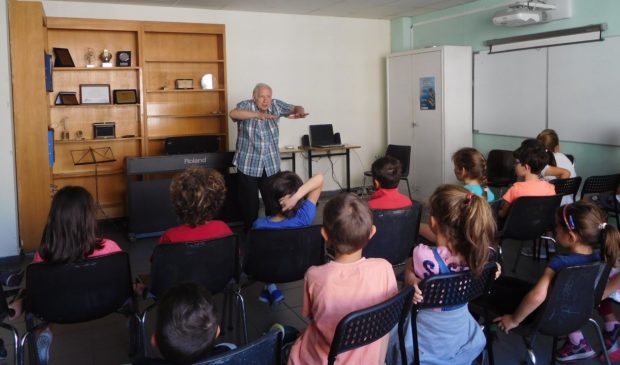 This Monday I have met Rodia and Chrysanthi, one of the trained of the company and they explained me more about the program and the festival they are organizing every year.

Many people have known them better thanks to the multilingual performances. The reason that drove to the achievement of the activity came out of a personal situation experienced firsthand by Rodhanti.

In 1995, in France, she started to train as a storyteller in a workshop with a multicultural nature and there she realized that traditional fairytales speak in the same way in every culture, including common values and ethics. She saw how this work got closer the members of the group and when she came back to Greece, she wanted to create the same connection between people of different cultures. In these years she is coming in touch with many associations that hosted foreigners, not only refugees but also students. All of them are interested in storytelling in their own language and, in this way, they form the “chore” of the multilingual group. At first, they are involved in the project in a very personal way that later becomes a collective work.

Action art is interested in traditional fairy tales from all around the world, a condition that they are folks and not written by famous and modern writers. In this way, Rodia collaborates with the natural storytellers who want to make known their own country and their culture, values in their own language. She found a very special way to work with them and now she is able to co-operate with people from Africa, France, Italy, Balkan countries, Japan, Turkish, Spanish and, this year, also Lithuanian.

The advantage of the multilingual project is that the stories told by the natural storytellers have some in common from culture to culture, no matter the language, and this is a way to learn each other cultures, values and traditions. Furthermore, this shows how the things that unite us are more than that divide us. 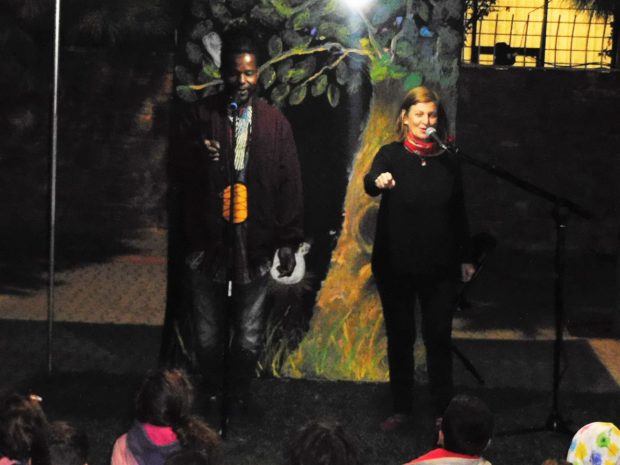 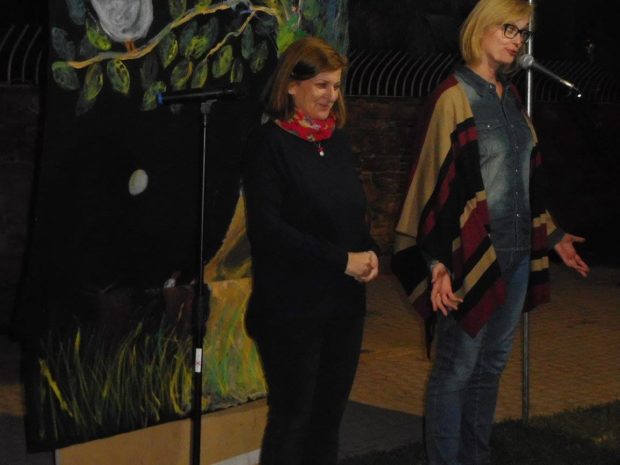 “It’s more or less the same feeling that we have when we are able to communicate with other people even though we use a different language.”

We may consider this as the good meaning of globalization in order to find our special place through the others and to collaborate for sharing this. An understanding of the intangible cultural heritage of different communities helps with intercultural dialogue and encourages mutual respect for other ways of life. This is a message to promote unity and sharing.

“Last year we had a project with Kurdish people coming from Syria in a refugee camp. We work with them in training courses and seminaries in order to help them become members of the group and also to be more welcomed in the new reality. They started telling and sharing fairytales in the native language promoting their culture. In this occasion, we realized how we are not so different as we think, on the other hand we have a lot of things in common no matter the country, the language, the culture. Everything is about memory. Memories make us alive, they connect us with our original country, with our roots. “ 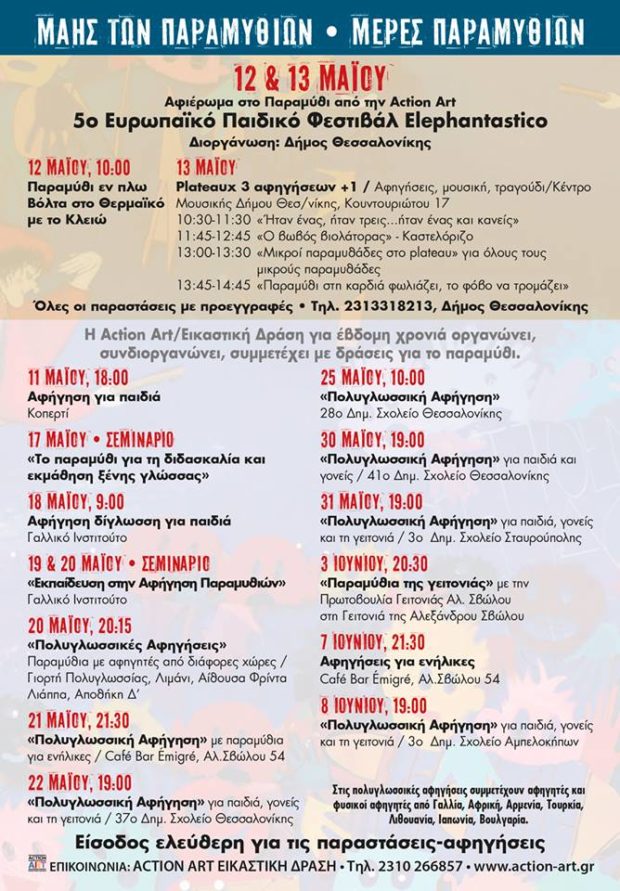 This year the festival started on 11th May and it’s going to finish on 8th June. The program includes a month full of events, multilingual performances, seminars not only in café places but also in schools and kindergartens. The inspiration was the fact that Thessaloniki is a city in which many languages have been spoken for centuries. The aim is to move throughout the city as people do: this is why the events are taking place in different areas. In this way, people come together exchanging personal ideas and getting to know each other in order also to fight the xenophobia, meaning the fear of the unknown. Also for this reason the company works with vulnerable people as refugees.

Most of the story-telling performances in schools are a multilingual experience, so the audience can come in touch, since a very early age, with the real world in which exist a lot of different languages. This activity occurs either in the morning as well as in the extra-curricular schedule, so also the neighbors can take part and join them sharing this experience.
The most interesting thing is that every year new many people attending the event.

Every year Action Art participates also in Elephantastico, a European event for children organized by the Municipality of Thessaloniki. This year On 12th morning Rodia had a performance about sea stories, creatures, men on the boat near the white tower which on a certain point started doing a cruise. On 13th May there was a combination of famous and well know storytellers from Thessaloniki (Maria Goga) but also from Athens. 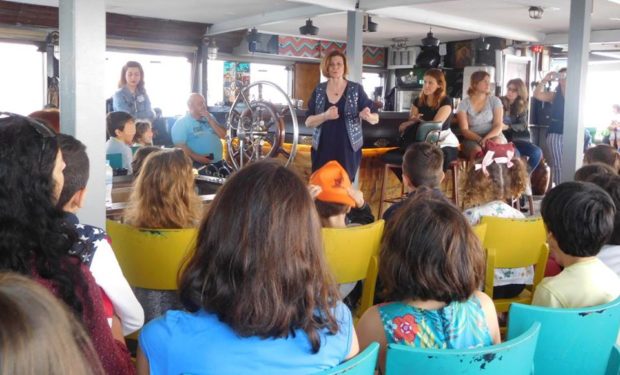 In the festival, there are several multilingual storytelling performances.
The 20th May, for another year, the company actively participated in another event organized by the Municipality of Thessaloniki, Multilingual-Polyglossia Festival. The event saw natural story-tellers from France, Japan, Turkey, Burkina Faso, Lithuanian who shared stories in their native language, stories nestled in their hearts and traveling with them. Every story was translated simultaneously in Greek by Rodhanti.

“Fairy tales are like birds: they look for ears to hear, hearts to nest, mouths to tell and sing.” 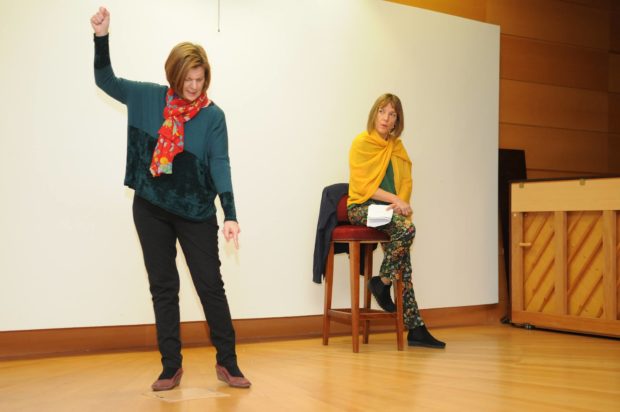 Also one of our volunteer, Eglė Puodžiūnaitė, took part in this event with her fairytale in Lithuanian and we are very proud of her and would like to share some pictures with all of you! 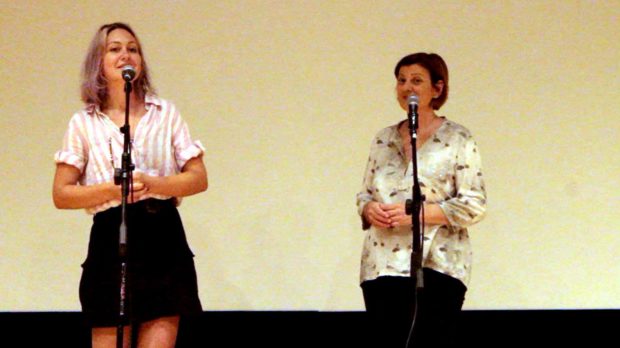 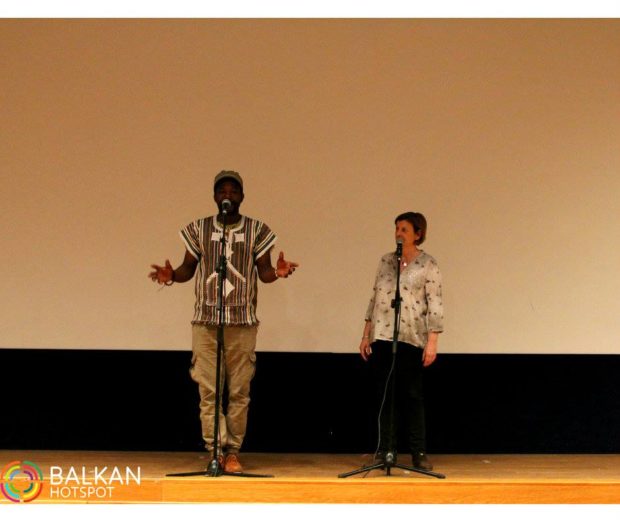 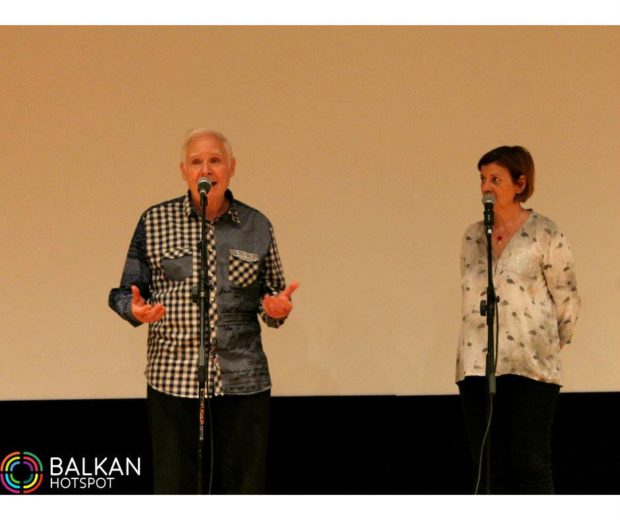 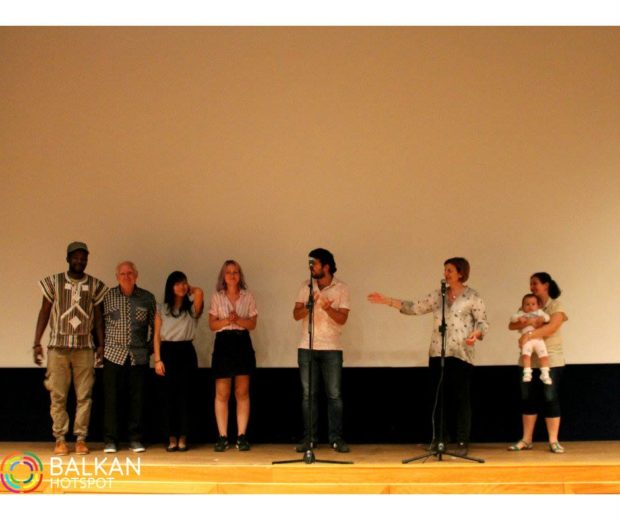 One important event will take place on 3rd June in the neighborhood of Alexandrou Svòlou. A small park is going to be opened and Action Art will be there proposing an event where everyone can take part. This is a kind of “open call” and everybody is asking to join the performance not just for listening but also for sharing own experiences, stories, fairytales.

Another event you shouldn’t miss it’s 7th June, day in which there is a final performance with people who had attended the festival during these years. This is an opportunity for them all to gather the skills they have acquired, present them in a personal performance and share with the audience.

I am a 21 year old Italian girl who moved to Greece for six months. My talent is languages; I am still studying in Palermo in the Faculty of Languages and Literatures - Intercultural Studies. Other hobbies are travelling and kids; in my free time I usually work as an animator and entertainer for them.