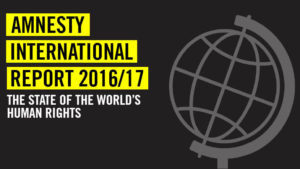 Amnesty International published the Annual Report for 2016 to 2017. According to the annual assessment of human rights, last year was marked by a “toxic speech” with the “us vs them” rhetoric creating a more divided and dangerous world. Salil Shetty, Secretary General of Amnesty International, alert to narratives of blame, hate and fear that are in levels not seen since the thirties, before the second world war. These ideas are using too legitimate economic and security options that divide and manipulate people and win votes.

According to Amnesty International, summery, 2016 was the year when “governments turned a blind eye to war crimes, pushed through deals that undermine the right to claim asylum, passed laws that violate free expression, incited murder of people simply because they are accused of using drugs, justified torture and mass surveillance, and extended draconian police powers”. The organization documented grave violations of human rights in 2016 in 159 countries.

One of the major concerns of the report are the politics of refugees and migrants. The Amnesty International’s Annual Report documents 36 countries violated international law and unlawfully sending of refugees back to a country where their rights were at risk. There are refugees and migrants arriving to Greece than are summarily returned. With the closure of the Balkan route, thousands of refugees, asylum-seekers and migrants “stranded in mainland Greece in poor conditions”. In the end of 2016, is estimated that 173,450 refugees, asylum-seekers and migrants had arrived by sea in Greece. More than 400 people died or were reported missing while trying to cross the Aegean Sea. On the mainland there are around 47,400 refugees, asylum-seekers and migrants and on the islands there are 15,384. The reception conditions on the islands were “overcrowded and insanitary”, creating tension between migrants and local people. This tension occasionally “erupted into violence, including riots” as in Lesvos, Chios and Leros.
The hate attacks against vulnerable groups continues. Far-right extremist has attacked a squat that provides shelter for refugees in Athens, in July. In the end of the year, suspected far-right extremists attacked refugees in Souda camp on Chios Island.  Two activist who tried to help the refugees were also attacked and hospitalized.

On 18 March 2016, EU and Turkey celebrated a deal “which Turkey agreed to take back all irregular migrants arriving on the Greek islands after 20 March, in exchange for €6 billion of targeted assistance.” While people were formally guaranteed access to an asylum process can be “returned to Turkey without a substantive examination of their claims”. The agreement was based on the idea of Turkey as a “safe country”. Along the year, researches showed that Turkey is not a safe country for asylum-seekers and refugees.
By the end of the year, while more than 66,000 places were pledged, only 7,286 asylum- seekers had been relocated from Greece to other European countries.
__________________________________________________________________

Summary of the state of Humans Right all around the World

Bangladesh: Authorities have pursued trials against media and the opposition for Facebook posts, for exemple.

China: Continued the crackdown against lawyers and activists continued with detention without communication and harassments of family members.

Ethiopia: The is government increasingly intolerant of dissenting voices and used the excuse of state of emergency to crack down on journalists, human rights defenders, the political opposition and protesters.

France: Heavy security measures under the prolonged state of emergency have included thousands of house searches, as well as travel bans and detentions.

Hungary: Government rhetoric was translated into a policy of systematic crackdown on refugee and migrants rights.

Myanmar: Tens of thousands of Rohingya people – who remain deprived of a nationality – displaced. There are reports of killings, indiscriminate firing on civilians, rape and arbitrary arrests.

Philippines: Extrajudicial executions happen after President Duterte promised to kill tens of thousands suspects of being involved in the drug traffic.

Russia:The government pressure increase around national NGOs with propaganda labelling critics as “undesirable” or “foreign agents”. Dozens of independent NGOs receiving foreign funding were added to the list of “foreign agents”. Abroad there was a complete disregard for international humanitarian law in Syria.

Saudi Arabia: Critics, human rights defenders and minority rights activists have been detained and jailed with charges such as “insulting the state”. The army forces led by Saudi Arabia committed war crimes in Yemen such as bombed schools, hospitals, markets and mosques, killing and injuring thousands of civilians using arms including internationally banned cluster bombs.

South Sudan: There are strong evidences to the use of chemical weapons by government forces in Darfur. Elsewhere, critics of the government was subjected to arbitrary arrests and detentions.

Sudan: There are strong evidences to the use of chemical weapons by government forces in Darfur. Elsewhere, critics of the government was subjected to arbitrary arrests and detentions.

Syria: Impunity for war crimes and gross human rights abuses continued, including indiscriminate attacks and direct attacks on civilians. Activists either imprisoned, tortured, disappeared, or forced to flee the country.

Thailand: Emergency powers and defamation were used to restrict freedom of expression.

Turkey:  Tens of thousands locked up after failed coup. Hundreds of NGOs were suspended and the media were crackdowned. The attacks to Kurdish areas continues.

UK:After the referendum about the European Union membership, increased the number of hate crimes. A new surveillance law granted more powers to the state intelligence agencies to invade people’s privacy.

USA: The election campaign marked by discriminatory, misogynitory and xenophobic rhetoric bring news concerns about the position of US with human rights domestically and globally.

Venezuela: Alarming situation about human rights caused by the government’s failure to meet the economic and social rights of the population.