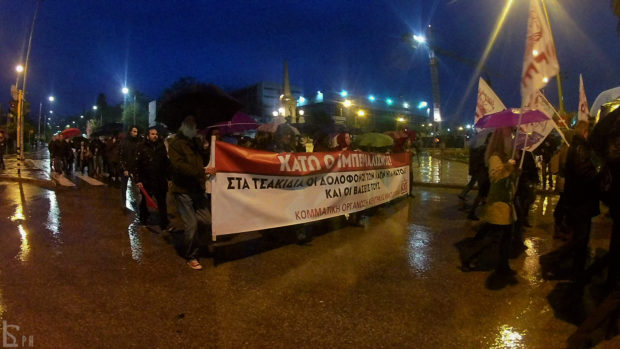 In Greece, the 17th of November is a remarkable date. It recalls the Athens Polytechnic Uprising, in 1973, against the Military Dictatorship (1967-1974) – also known as the Military Junta, or the Regime of the Coronels – that the country had been submitted to for over 6 years. In order to «save the nation», the Coronels set their strength to abolish the communist movements proclaimed to be happening. This led to actions like the dissolution of political parties, disclosure of propaganda and the abolishment of some civil rights. The unceasing oppression over the people, the presence of USA agents and their support towards the government, as well as the influence of other liberalization movements around Europe, culminated in the, nowadays well known, Polytechnic Uprising. Student-protesting has always been a strong contributing factor for the changing and improvement of Greek politics so, in 1973 it was not different.

The manifestation lasted for 3 days, and it was absolutely astonishing, violent and suffocating.  On the morning of 14th, the student unions had a meeting, in the Polytechnic, to decide what would happen concerning the rejection of the student elections by the government.  They decided to occupy the building and create a radio station, broadcasting all over Athens. Via radio, they appealed to all the revolted to gather together in the roads, and protest with them. People responded to this appeal and, by the next morning, thousands of youngsters and workers were assembled around the University area. Everyone shouted against the USA presence, appealing for freedom, food and education, while more and more people joined the crowd, as a response to the Free Besieged[i]. By the 16th, a farmers’ committee had joined the students cause, proclaiming to be fighting by their side. This was not only a students’ protest anymore, it was also a people’s protest and, all together, they believed they would achieve a better path for Greece. On that day, in the evening, the protest started taking an extremely violent course, ending not long after midnight, on the 17th, when Papadopoulos, the leader of the Junta, gave the order to destroy the gates of the building with a tank crash. Although the protest surface was surrounded by tanks, the crowds weren’t afraid, not even when a 20-minute notice was given for everyone to deviate from the gate area. Actually, students climbed them, being crushed to death while a tank knocked down the gates. During all this time, the radio students transmitted an emotional and desperate appeal to the soldiers, through the radio, asking them not to fight «brothers protesting». Although the main purpose wasn’t achieved – the dictatorship went on for another year – this event is regarded as the beginning of the end of a 7-year-oppressed-country.

Nowadays, this date is a holiday for all schools and universities, being looked at with a high level of pride by Greek students. Although the manifestation was set in Athens, the commemorations of this date occur all over the country, with an organized demonstration of the happening. Despite the fact that not much happened in Thessaloniki, during the Uprising, there is an annual march, organized by the students of the city and, this year, Balkan HotSpot was there. From the University building to Aristotle Square, hundreds of Thessaloniki citizens walked in remembrance of the happenings of the Uprising, shouting out command words, raising the question of whether they were recapitulating what happened in 1972, or fighting for their rights today:

«This government makes us suffer!»

In front of the United States of America’s embassy, at 5:52pm, an USA flag was burnt, recalling the existent hatred towards the American nation at the time. With this being the climax of the march, it was a calm, organized, nearly robotic event, even though there was a hostile ambience that could be felt in the air. 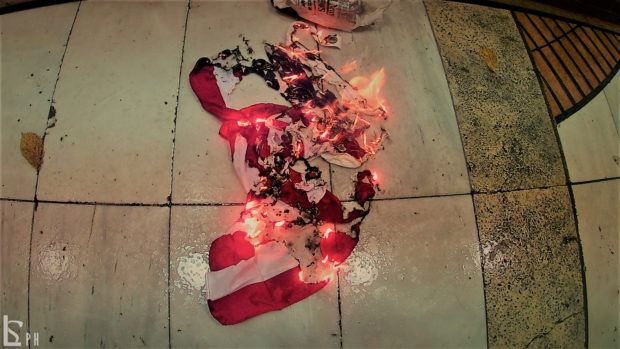 USA flag burning in front of the USA Embassy
by: Lorenzo Sciuca

[i] Auto-denomination of the students controlling the radio; reference to Dionysios Solomos’ poem (1851)